Sachiko, tell us your story and how did you get to the UK

My parents had a casual diner restaurant in Japan where I spent my childhood helping out. Later, they moved to a catering business which delivered kaiseki style food to people’s homes during special occasions. It is called a Shidashi-ya, an old fashion business which may no longer exist nowadays. This early experience has influenced how I cook and think about food.

I went to art school in Japan. I met my British husband while working in the US. We worked at the same artists residency in Omaha, Nebraska. After spending time in each other’s countries I decided to move to the UK. Both of us come from a food business family so we share similar roots. Since then, mostly I have worked as a chef in the catering industry, from a vegetarian Modern British restaurant to a Japanese Michelin restaurant in London. At the same time I taught at various cookery schools in the UK.

What does cooking mean to you?

Cooking is part of my family history and I feel it’s where I belong. For me it’s a joy, all the while fascinating, creative, constantly learning and serves as a way to connect to society.

Cooking is a mindful activity. Although sometimes I wonder, perhaps I am more interested in the eating than the cooking? Growing up, I was never a fussy eater and don’t really have any dislikes, as long as the food is cooked well I’m happy. I can always find something good in the foods I eat. For me, cooking works like a puzzle, looking for the best pairings. So cooking continues to fulfil my curiosity, allowing me to try new foods that go well together.

How relevant is Japanese food culture to your daily life and how do you feel connected to it despite living in the UK?

Cooking and thinking about food occupies most of my every day and hour. I think Japanese food in Europe is still in its early days in its establishment, although, interestingly shōyu has been exported on a regular basis since the 18th century to Holland.

When food cultures get transplanted into another culture different aspects are emphasised and informed and reinterpreted by the foster culture. Authenticity is not easy to translate since food and our relationships with it are constantly evolving. I feel I am straddling that divide. On the one hand living in the UK has opened up possibilities to experiment with fermentation processes but employing new ingredients, for example using chick peas, black eyed beans and split peas to make miso, or making rice kōji with jasmine rice. These are things I would not have considered if living in Japan.

However, right or wrong still exists when it comes to Japanese cuisine. For example a well known cook writing for a national newspaper wrote about donburi which essentially means “large bowl” yet the picture that was published to illustrate the dish was missing the bowl, serving the food on a plate instead. Another example comes from the popular food programme Great British Bake Off. In their Japanese Week the competing cooks were tasked to create foods on the theme. What we saw was very little understanding of Japanese ingredients as the bakers proceeded to use ingredients from China, India and Thailand. As Japanese cuisine continues to gain more popularity, I wish cooks with real knowledge, perhaps from the Japanese communities, could be made more visible and involved in its development.

How important are fermented foods in the Japanese culinary tradition?

Fermentation has had a long relationship with Japanese culture. Without fermentation there is no way we can cook or eat any single Japanese meal since major condiments such as shōyu, miso and mirin are fermented. Japanese food culture is built on hard work and knowledge learnt from nature and fermentation is not able to work without its cooperation and collaboration. I like to think that Japanese people pay great respect to nature and from that receive a bounty in return.

In addition, the various Japanese climates gave a regional uniqueness to shōyu, miso, pickles and many preservatives. This has helped to give a regional character to local food culture in Japan. These products are often consumed and supported only by locals as well as contributing to their economy through tourism.

Nowadays there is a growing community interested in fermented foods whether for its health benefits or its sensory versatility. Do you think this could be a great opportunity for Western diners to discover Japanese gastronomy beyond sushi and ramen?

Absolutely it is. It has been such an exciting last few years in world food trends. The COVID lockdown gave us an opportunity to rethink what we eat and how we eat. An important break to reevaluate our relationships to the world on so many levels.

I believe Japanese fermented foods can play an important role in future diets. In vegetarian or plant-based foods, salt and sugar are still the main ingredients for seasoning. However fermented condiments, which are naturally rich in umami could reduce the use of those seasonings. It is well documented that fermented foods improves gut health so their consumption would improve wellbeing in both body and mind.

Given your experience as a Chef teaching about Japanese food culture, what sensory aspects of fermented foods do you think could be more appealing and more challenging for western diners?

Generally fermented meat products are more common than fish products in the West. So people here may be sensitive to fermented fish smells. Someone once told me that plain dry seaweed has a bad fishy smell. So familiarity plays a part in how people accept different smells and tastes. However many of us love strong salty and umami flavours such as soy sauce and miso. Those unique smells of bitter, caramel, nutty and slightly sour that connect to umami are being accepted more.

I really enjoy textures, crunchy, chewy, slimy, fluffy. There are so many. I tend to use a variety of textures in one meal and don’t enjoy eating one flavour from beginning to end. There is an eating style called Ichi ju sansai which means one soup with three side dishes. Of course a bowl of rice and pickles are served too. Each side dish is small with different seasoning and textures. That’s how I enjoy a meal mostly.

Which fermented food do you like the most, and which sensory attribute of that food is the most rewarding for you?

Oh that’s a terrible question! There are so many I love, but if forced I would have to say nattō and takuan. Nattō is fermented soy bean, the smell is close to tempeh but with a slimy texture. Sounds terrible I know yet so delicious although I’m not sure if it is to do with texture or taste. Slimy, sloppy, fluffy, nutty, bitter and umami.

Takuan is pickled radish. There is a type called Nukazuke which is like sauerkraut and fermented with lacto acid and processed in a bed of rice bran. It’s crunchy, sour and sweet. I think fermented foods taste very complex. Honestly it is more than just delicious and I find it deeply satisfying and brings joy to my heart. I think this is what umami does to us.

Which traditional Japanese fermented food would you recommend to a curious diner who wants to give it a try?

Of course it would be nattō. I know for sure it’s not to everyone’s taste, but there’s no harm in trying. Actually it has tons of health benefits! I would also recommend Amazake. This is fermented sweet rice porridge. My father makes this from glutinous rice and rice kōji starter, fermenting overnight in a warm chamber. kōji is a mold used in many types of Japanese fermented foods. This sweet rice can be diluted and enjoyed as a drink, its natural sweetness and fragrance are truly wonderful. You can buy in Japanese grocery stores or online. If you have a yogurt maker you can make it very easily. Add rice kōji and water 1:1.2 ratio, keep at 60º for 8-10 hours. Eat as a gluten free breakfast instead of your cereal. It contains high glucose which is why it is the best fuel for waking up our brain to start the day!

To know more about Sachiko and her work, please click on the links down bellow. 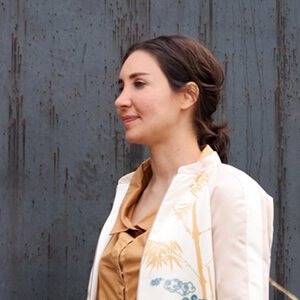